This site was designed for the latest version of Chrome, Firefox, Safari, and Internet Explorer (version 10+). Some features may not work correctly in your browser. OK

London's Ultra Low Emmision Zone - Does it Affect You ?

Like the Congestion Charge Zone (CCZ), the Ultra Low Emissions Zone covers an area of London that drivers to have to pay to travel within. Only those driving, as the name suggests, an ultra-low emission vehicle will be exempt.

Entering the ULEZ costs £12.50 for a car and £100 for a vehicle over 3.5 tonnes and unlike the current Congestion Charge Zone (CCZ), the fee applies no matter what time you travel: 24 hours a day, 365 days a year. The ULEZ will expand in years to come, too.

At its inception on April 8 2019, the ULEZ will cover the same area as the current CCZ. It’s a relatively small patch in central London below Camden, cutting through Westminster, to the left of Tower Hamlets and above Southwark. It covers 8.1 square miles and makes up just 1.3 percent of Greater London.

However, the ULEZ will get bigger in October 2021, when the North and South Circular roads will serve as the new boundaries. While the CCZ stops just before Camden, for example, the ULEZ post-October 2021 will cut off part-way into Barnet.

On the Transport for London (TfL) website, it also states that; ‘If you are driving any petrol or diesel vehicle within this enlarged area you will need to meet new tighter emissions standards or pay a daily charge’.

London ULEZ – which vehicles are affected?

The ULEZ will be enforced based on the declared emissions of the vehicle rather than its age. Euro 4 became mandatory for all new cars in 2005, while Euro 6 was introduced for all cars and light vans from September 2015 (January 2014 for larger vehicles).

Therefore:
Benefits of the ULEZ

The introduction of the ULEZ will help reduce exhaust NOx and PM emissions, helping to improve air quality and making central London a safer and more pleasant place to live, work and visit. These positive effects will be especially beneficial to the young, older people and those who have respiratory problems, as well as residents of high pollution areas.

The majority of traffic entering the ULEZ will be from outside the zone, so the benefits of cleaner, greener vehicles in the form of reduced emissions will be experienced across London, even to areas not in the zone.
Where is the ULEZ Zone? 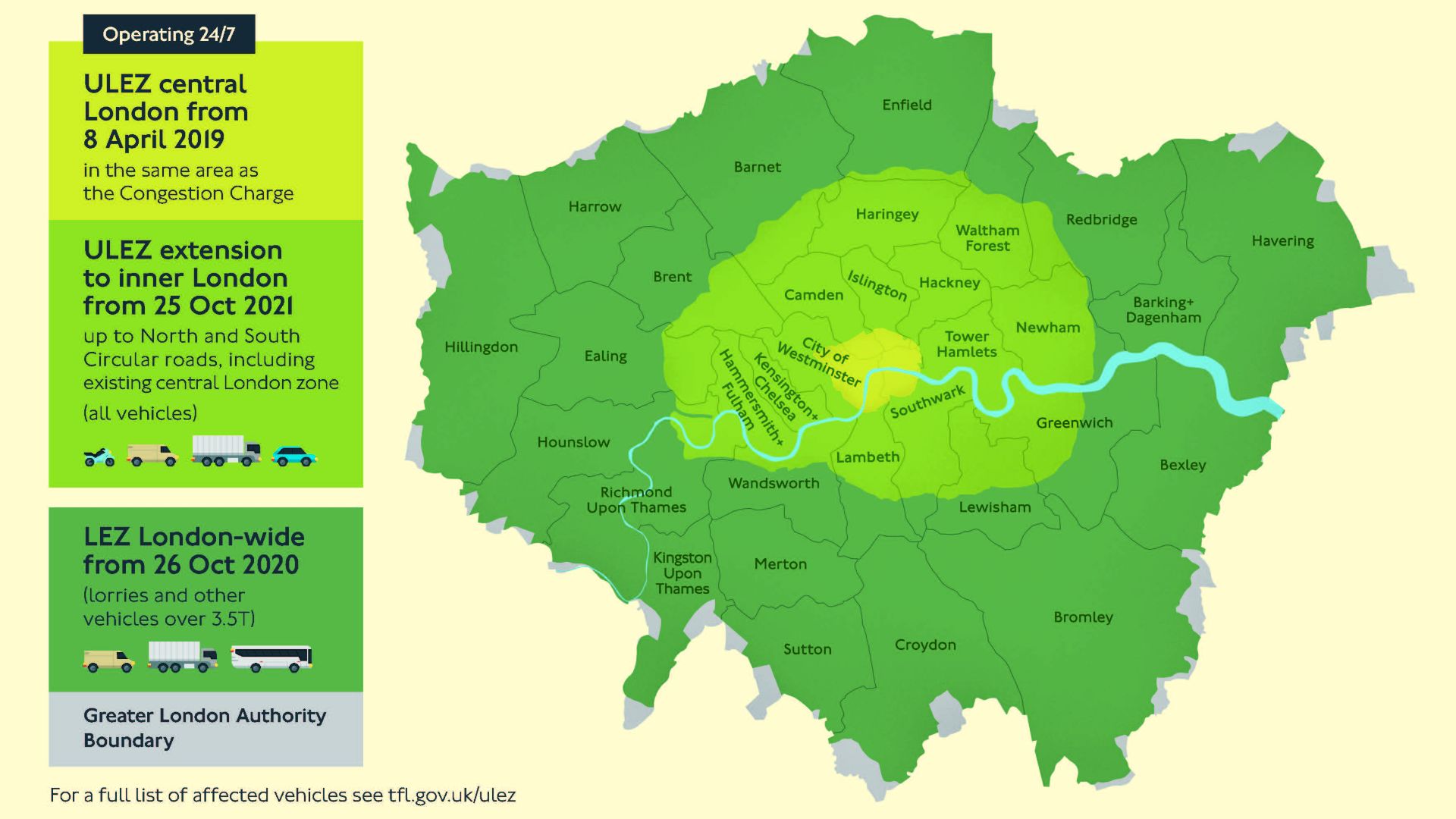 
A key point to note: the charge doesn’t buy you 24 hours in the ULEZ. The clock restarts at midnight, so if you drive into the zone at 11pm and leave at 3am the next day, you’ll be expected to pay £25 – or £200 if you’re in a non-compliant vehicle over 3.5 tonnes.

The ULEZ will operate 24 hours a day, every day of the year including weekends and public holidays. It will cover the same area as the Congestion Charging Zone until 2021.

What’s more, if you’re in the area when the Congestion Charge is applicable, the ULEZ charge is paid IN ADDITION to the C-Charge. The ULEZ charge does, however, completely replace the current Emissions Surcharge (T-Charge).

Some drivers and vehicles will qualify for at least a temporary discount from the Ultra Low Emission Zone charge (ULEZ). Others will be entirely exempt.

Residents who are registered for the residents' Congestion Charge discount will be granted a time-limited 'sunset period' where a 100% discount from the ULEZ will apply to their vehicles. This will give them more time to change their vehicle to meet the ULEZ standards
The discount will be available to those who live within the ULEZ and in designated areas next to the boundary where the Congestion Charge residents' discount applies. The sunset period will apply from 8 April 2019 to 24 October 2021
This discount will only apply while they live within the zone and are registered with us
Residents using a vehicle that doesn't meet the T-Charge emissions standards will continue to pay the T-Charge, at a discounted rate of 90%, during the ULEZ resident sunset period
From 25 October 2021, residents must pay the full daily ULEZ charge to drive a vehicle in the zone if it does not meet the ULEZ standards

Keepers of vehicles registered with a 'disabled' or 'disabled passenger vehicles' tax class will benefit from a sunset period after the ULEZ starts. They'll be exempt from the ULEZ charge until 26 October 2025 as long as their vehicle doesn't change tax class. (Vehicles operated by or on behalf of TfL will not benefit from this sunset period.) Read the eligibility criteria for the disabled exemption on Gov.uk
If your UK-registered vehicle is in this category, you don't need to register with us to get the exemption. If your 'disabled' vehicle is registered outside the UK, you are also exempt from ULEZ during the sunset period, but will need to register with us. We'll explain how to register your vehicle closer to the time
Blue Badge holders will need to pay the charge from 8 April 2019 unless their vehicle meets the new ULEZ emission standards or is registered with the DVLA with a 'disabled' or 'disabled passenger vehicle' tax class
From 27 October 2025 vehicles with 'disabled' or 'disabled passenger vehicles' tax class that do not meet the ULEZ emission standards will be liable for the daily ULEZ charge

London-licensed taxis are exempt from ULEZ - they are subject to a 15-year age limit and new emissions standards have already been introduced for them. From 1 January 2018 all newly licensed taxis must be capable of producing zero emissions.

You can apply to stop paying vehicle tax if your vehicle was built more than 40 years ago. This date moves forward on a 40-year rolling system. Assuming the rules stay the same, when the ULEZ launches in April 2019, vehicles built before 1979 will be eligible to apply for historic vehicle tax class.
All vehicles that have a historic vehicle tax class will be exempt from the ULEZ. This tax class excludes any vehicle used commercially (for example, coffee vans or street food vans).
In line with the existing LEZ discount all vehicles registered before 1 January 1973 will be exempt from the ULEZ, regardless of commercial use or otherwise.
Haynes Trucks
Ford Car Range
Ford Commercial Vehicles
- + Disclaimers